Territory Wars allow factions to battle for control of the territories of Perfect World.

There are 44 states available for conquest. The higher the level of the state the bigger the return of the clan. 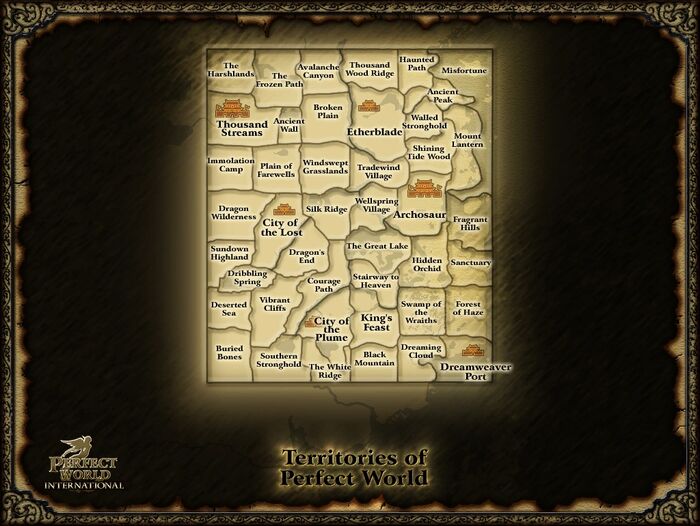 Benefits of ruling a stateEdit

2. Free Teleport Members of the ruling clan shall pay no fee to teleport to and from the state. Transfer skill has a cool down period.

3. Map Ownership Ruling clan shall have their name placed on the map details. Every time a player hovers the mouse through the state location, the name and logo of the clan shall appear.

4. Double Experience Members of the winning clan get an extra hour of double experience per week for every state they occupy.

5. Apothecary Only members of the faction that owns a territory can use the services of the Officer NPC of the territory. The Officer sells level 70, 80, and 90 HP and MP Potions and Elixirs. The Officer gives "quests" to "craft" the highest level Apothecary items, using ingredients from Lothranis and Momagnon. This is the only way to make these items. It is not the only way to advance in Apothecary at the same level, though; Physical and Magical attack charms can be made instead.

Bidding for the right to attack a stateEdit

After the Bidding PeriodEdit

Bidding refunds after a Territorial WarEdit

Clan Generals can upgrade their clan level by paying the upgrade fee at the NPC. Clans who owns 3 or more state can only defend a maximum of 3 state for every war period. During the warring states each clan can only have as much as 80 units per clan per warring state zone. 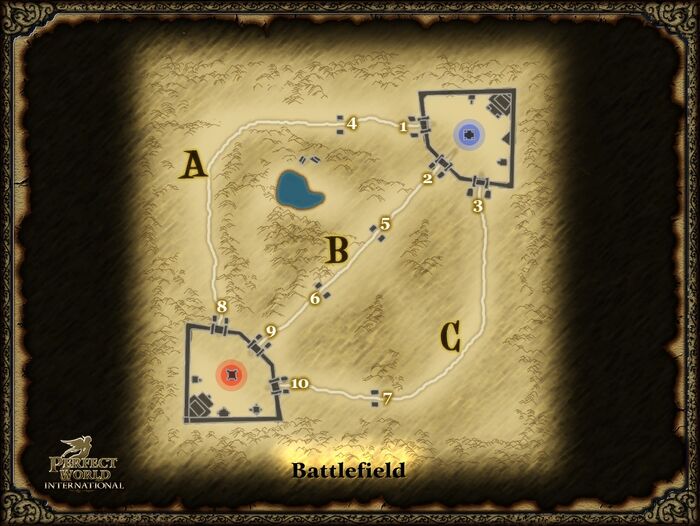 The Territorial War Battlefield Map is a 1 kilometer square battlefield with the offense and defense Clan Bases situated at diagonally opposite corners.

The main objective for both Clans to defend or destroy, this structure is what the Territorial War all boils down to. The Central Building can be damaged by only Players and Catapults, with Catapults being the better options as they deal significantly more damage.

It is also important to keep in mind that during the 30 second building time of any Arrow Tower, it has only 100,000 Health Points and 0 Defense, making it more vulnerable to being destroyed.

Catapults are the main offensive weapons used in the Battlefield Map and can be found behind the Central Building, in front of the Revival Point. This location also serves as their starting point. They fire automatically at any target in their range, but only attack Arrow Towers, Transfer Columns, and the Central Building, and nothing else.

The Transfer Field and ColumnsEdit

Retrieved from "https://perfectworldinternational.fandom.com/wiki/Territory_Wars?oldid=10894"
Community content is available under CC-BY-SA unless otherwise noted.